Village Green Studios has been in the digital design and marketing space since 2001. It started as a CD design shop for bands and quickly found a huuuuuge niche in doing CD demo graphic designs for voice over artists. That grew into offering

VGS is run by me, Jason Sikes. I graduated Northwestern University in 1986 with a BS degree in Radio, TV & Film. I talked my way into a junior marketing exec position at the just launched E! Entertainment Television where I worked a block up from the famous Hollywood & Vine. Lots of bums and heroin addicts hung out down there back then. None of which were famous. Made my way over to the struggling, then four-night-a-week, FOX network as a midlevel marketing guy. My office had a view of the gate in the Charlie’s Angels open. Then was tapped to be the Director of Development for Daytime, Latenight and Alternative Programming. Fancy title for saying I spent a lot of time denying that I had anything to do with The Chevy Chase latenight talkshow.

I left with a buddy and we sold and produced a whole mess of TV pilots. None of which made it to air for various and often bizarre reasons. Came back to the corporate side, got my VP stripes but it just wasn’t for me. After 8 months I chucked my stripes and vowed that I would never work for The Man again. And I haven’t.

I live to be creative and make things. That is what has always driven me. I taught myself to use the tools of design and web design, mixed in a healthy dose of the marketing experience I garnered and suddenly everything startedgoing my way. There must be some truth to that whole “follow your bliss” business.

TOP
WHAT WE DO

close
we have been in the digital marketing space for over 15 years using the client website as the blazing sun of their marketing galaxy.
what sets us apart can be summed up in two words:
There are loads of places that can build a website for you. You could even use one of those do-it-yourself places.
problem is, you’re gonna get a one size-fits-all template. 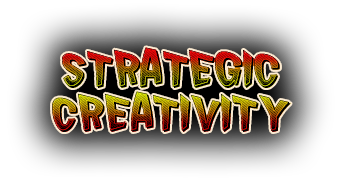 if your biz doesn’t stand out  you’ve got a big problem!
if you have competition then you need to stand out. Now the trick is how to stand out correctly. That's called  branding. branding is simply defining your unique position in the marketplace via strategic creativity.

next up: Marketing strategic/effective communication of the business opportunity complete with branding.

seo helps but it is a wily and constantly changing beast. We'll do that for you as well, but for cost/roi and precision targeting, nothing beats Social Media Marketing right now.

not to mention: printed materials,
whiteboard videos,
mass email campaigns... we pretty much do it all.

but don't get ahead of yourself. It all starts with the website.